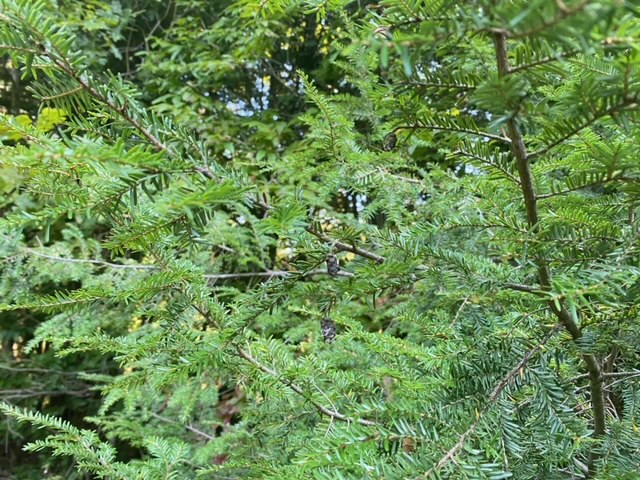 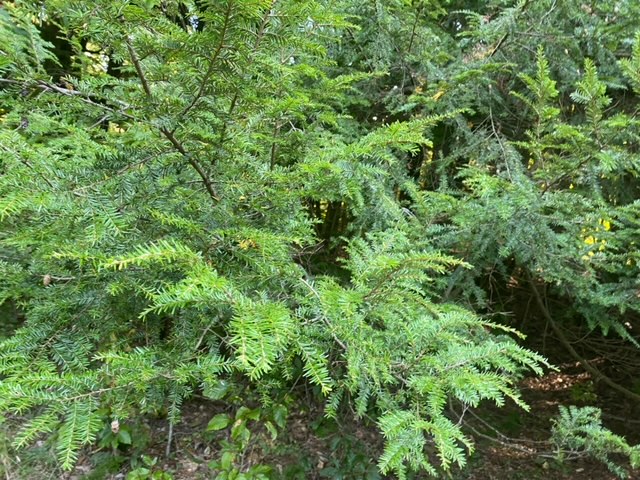 The Eastern Hemlock is a conifer that is known to prefer the acidic soil that the sandstone bedrock of eastern Ohio provides. This tree can be identified by short, flexible needles that have a white tint underneath and are more rounded than its look-a-likes5. It takes a while for this hemlock to mature, about 300 years, and about six years for it to die off from Hemlock Woolly Adelgid, a foreign insect that feeds off its sap5. Due to the introduction of this species, the population of Tsuga canadensis in the United States is declining. 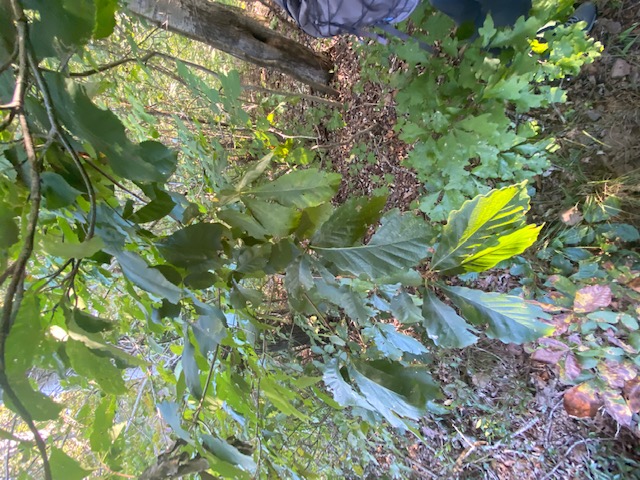 The Chestnut Oak is another species that thrives in the eastern, sandstone areas of Ohio. The alternate simple leaves are long and edged with wavy teeth which meet at a point. The wood of this tree is resistant to rot, making it a popular choice for fence posts and railroad ties5. It is also interesting to note that this tree is the preferred host of the Gyspy Moth, but the Chestnut Oak is not considered at risk5.

For this tree and the next tree, I do not have any photos. I didn’t know that we would need trees mentioned by Jane Forsyth in her article, “Linking Geology and Botany: a new approach”, so the only pictures I have of the trees she mentioned are of the first two trees. But anyway, the next two trees are very interesting and fun to learn about.

The Redbud is a popular tree in Ohio, growing mostly in the acidic sandstone regions of the state. Once you learn the recognize its smooth-edged heart-shaped leaves you will begin to see it in most places you visit. It also flowers bright pink in spring and grows legumes in the fall that turn from green to brown as they mature. The Native Americans used this tree to make medicine by creating a type of lotion from its bark5.

Another tree mentioned by Forsyth in her article that grows in the acidic sandstone areas of Ohio is the Northern Hackberry. The alternate simple leaves are wide, long, and toothed with three hairy veins underneath5. They produce reddish drupes that are eaten by many forms of wildlife and even humans5. The name is believed to come from the Scottish word “hagberry” which is a term for what Americans call cherries5.

The American Chestnut use to be scattered throughout the parks of Ohio. Nowadays, you’ll be lucky to find one even if you’re the type of person who goes hiking every day. What caused this decline in American Chestnuts? Cryphonectria parasitica, or Chestnut Blight, is a fungus that was introduced to North America from Asia and quickly spread between chestnut trees as it killed them1. The effects of this loss were felt by animals and humans alike. The American Chestnut produced fruits that were often fed on by forest animals, as well as given to cattle and sold for human consumption1. One species of fungus was able to affect business in North America, and more importantly, dramatically change its ecosystem. The tree is only kept alive by conservation efforts to replant it, as well as through its root system, as Chestnut Blight is unable to destroy the chestnut tree’s roots1.

Another tree that has seen a drastic decline in population size is the Butternut, Juglans cinerea. Like the American Chestnut, a fungal disease is known to be the culprit. Sirococcus clavigignenti-juglandacearum, or butternut canker, feeds off the tree just underneath the bark, leaving canker sores that eventually leave the tree dead4. However, hope is not lost! There are butternut trees that appear resistant to this disease and there are efforts to conserve these trees and use their seeds to plant new butternut canker-resistant trees4. 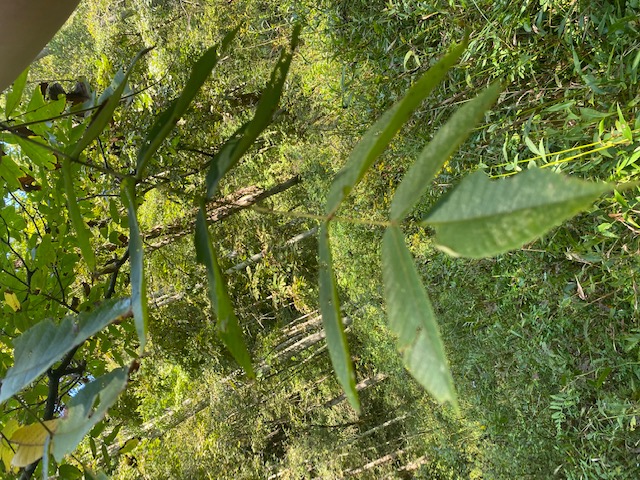 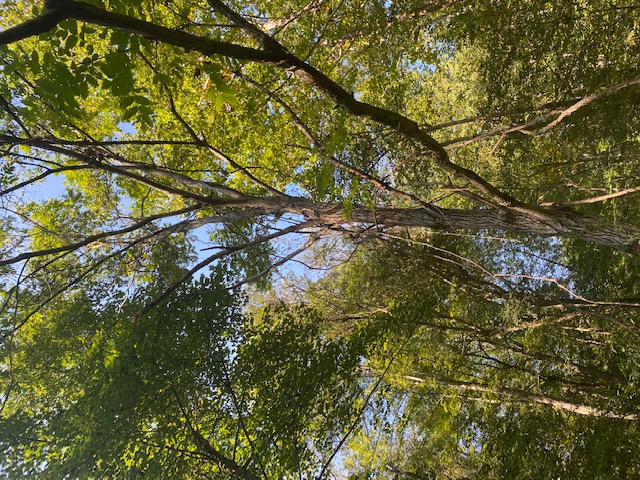 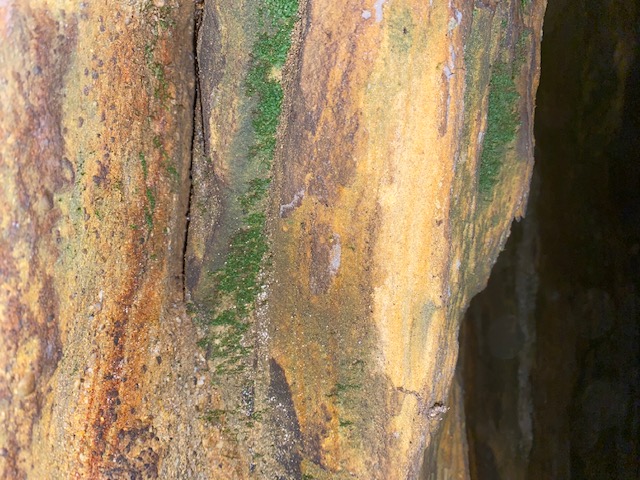 Vittaria appalachiana is one of the most interesting gametophytes of the ferns. Also known as the Appalachian Gametophyte, Vittaria appalachiana is one of three species where there are no known mature sporophytes since it is able to reproduce asexually7. The mechanism that makes this possible involves gemmae, which consist of multiple cells and are able to spread through wind or animals, similarly to spores7. However, there are crucial differences between spores and gemmae. The size of gemmae makes it difficult for them to spread over long distances using wind dispersal, so they are likely spread through short-distance wind dispersal, water, and animals7. Kimmer and Young are two researchers who even found evidence that slugs can carry the gemmae over short distances7. This limited dispersal method is odd for a plant, but there is more evidence to support this claim.

This plant is known to be able to survive in areas outside of where it is found, so why is it only found in specific locations across the northeast United States? It is believed to be because of the restrictions gemmae put on dispersal. There have been no species of Vittaria appalachiana found above the glacial line separating Ohio, but many species are found in isolation south of this glacial border7. This leads researchers to believe that this species lost its ability to produce mature sporophytes before the last ice age ended twenty-five thousand years ago. By the time it lost this ability, the Appalachian Gametophyte was already spread across many northeastern states allowing the plant to survive until modern times. This is the current belief behind the origin of this species, as other suggestions, such as a tropical sporophyte using long-distance dispersal to maintain the population, have little evidence, or evidence against them7.

For my individual assignment, I was asked to find two different ferns. So here they are: 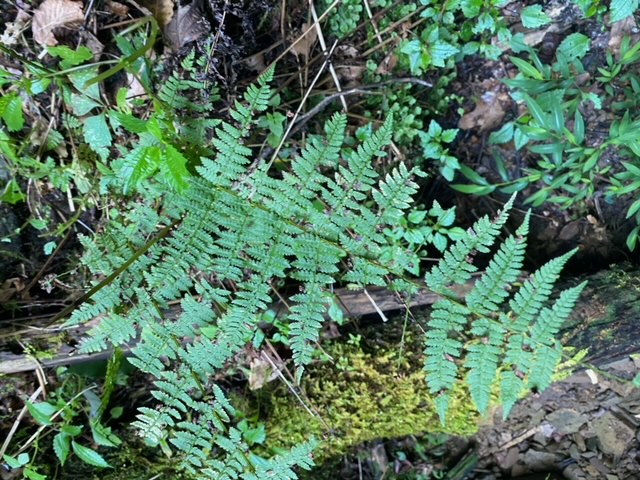 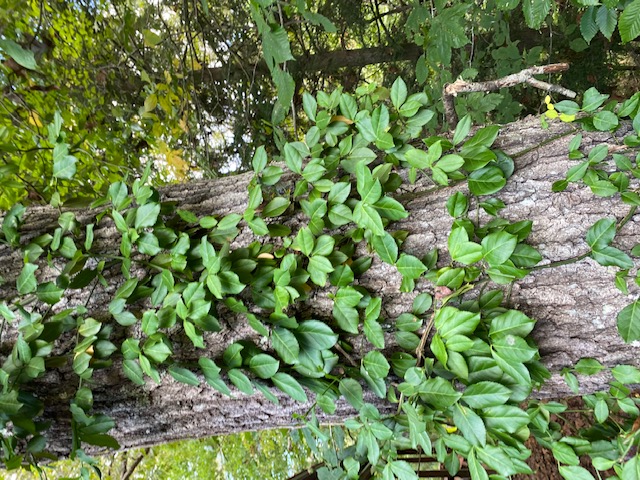 The Winter Creeper has an attractive bright green and grows fairly quickly making it a seemingly perfect plant to add to your yard. In fact, this vine used to be sold as an ornamental ground cover8. However, now it is considered an invasive plant due to its ability to grow quickly and survive in various environments, especially the acidic sandstone areas of eastern Ohio. If you see this plant, there are many chemical options to get rid of it before it spreads. However, the best means of prevention is to not plant it at all. 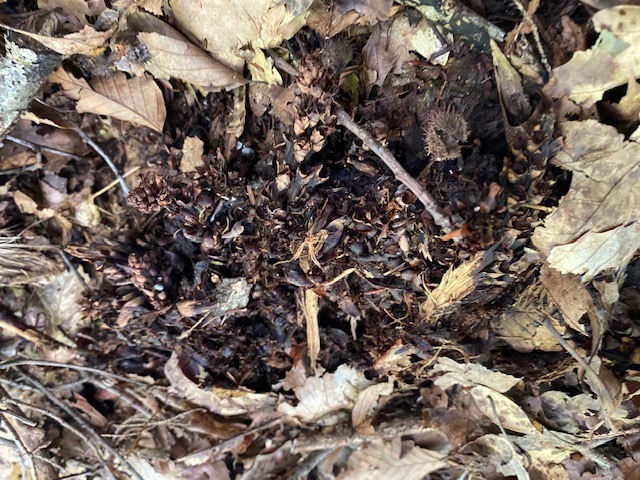 This plant is one of two parasitic plants I saw on my trip to Hocking Hills! Which is crazy since both are rare plants to find. The Bear-corn feeds on the roots of oak and beech trees2. In the spring this plant produces flowers, though in the fall it starts to look like burnt pinecones as you can see in the picture. Though this plant is parasitic, it is not considered harmful and is eaten by many woodland animals. Yes, that includes bears. 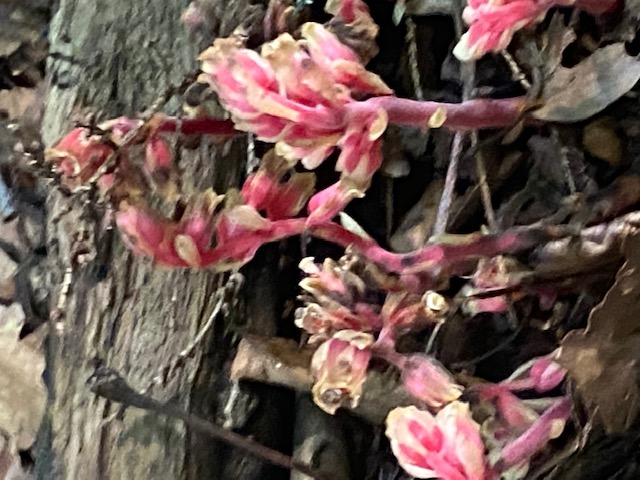 Pine sap is probably the most interesting flower I have ever found! This parasitic plant is often confused with a fungus but is instead a flowering plant that uses mycelium networks to feed off of oaks and pines6. It appears entirely a beautiful whitish-pink to pink since the plant lacks chlorophyll, which attracts bumblebees to pollinate it and wildlife such as deer to eat the flowering buds6. 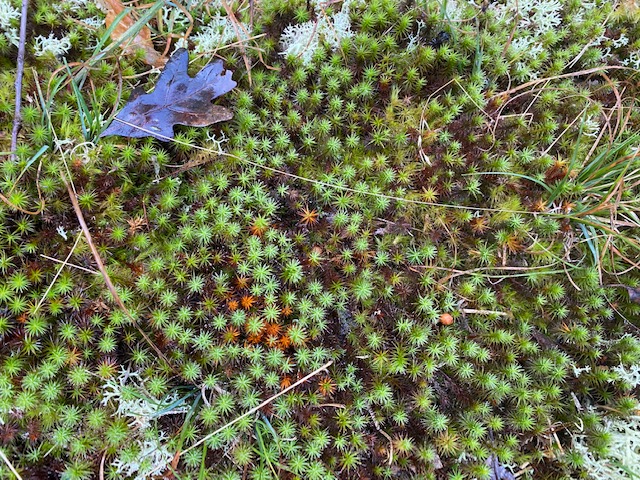 The Haircap Moss is unique and easily identifiable by its large size compared to other mosses3. It can grow over six inches in height and is named after the calyptrae that cover its spores making it look hairy3. This moss is used by many wildlife as well. From small insects that want to use its leaves as cover to species of robins that use parts of the moss for their nest3.