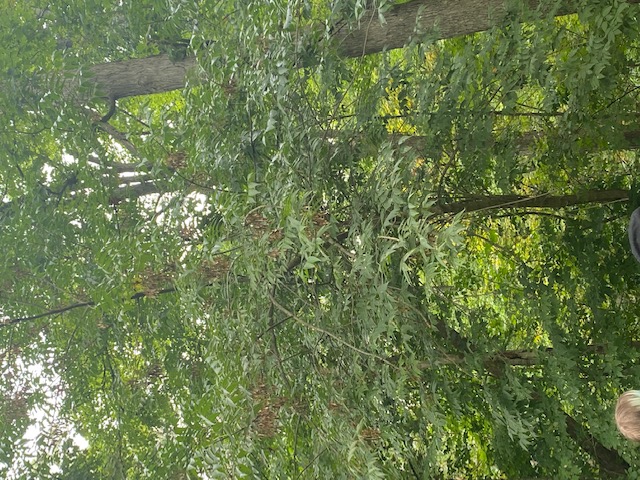 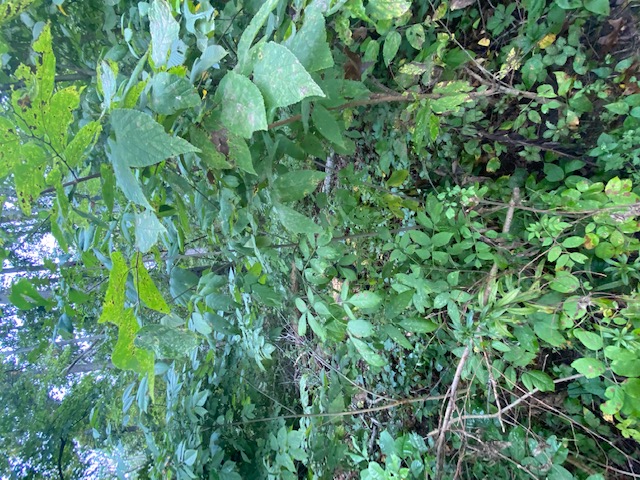 Northern Hackberry – alternate simple fan-veined leaves that are always toothed. Located in the top right of the picture.

7. Some trees that are generally limited to high-lime, high-clay substrate areas of Ohio:

8. Some trees and shrubs that are generally limited to the acidic sandstone hills:

9. The major determinant of species is not always simply the type of bedrock the plant is growing over. For example, the distribution of hemlock seems to be more dependent on the environment. Though it likes the limey soil, it can be found in eastern parts of Ohio because it loves a cool moist area to grow in that the sandstone hills can provide. This is different than the sweet buckeye, which is only found in eastern areas of Ohio and never in areas where glaciers used to be. Rhododendron also seems to grow only south of the glacial border, but the reason is different than that of the sweet buckeye. It is believed that this tree migrated to southern Ohio using the Teays River and has lived there ever since.

Cedar bog is a limestone-rich, alkaline-based fen. That’s right, a fen instead of a bog. That means that there are streams that are constantly draining the water out of the area, and allowing new water to flow into the fen carrying limestone. This particular fen called Cedar Bog (this is going to get confusing) is made possible due to valleys carved out by the Teays River I mentioned in the last section. The river, which is now covered up due to the glaciers, still allows water to flow underground and pass through Cedar Bog. All of these things put together are what make this preservation so unique. Now, Cedar Bog is home to many rare alkaline-loving plants that I will love to show you.

But first, here are some pictures of the Cedar Bog landscape: 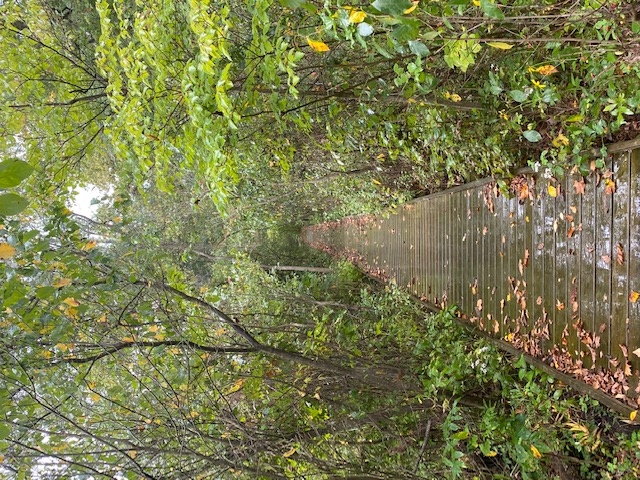 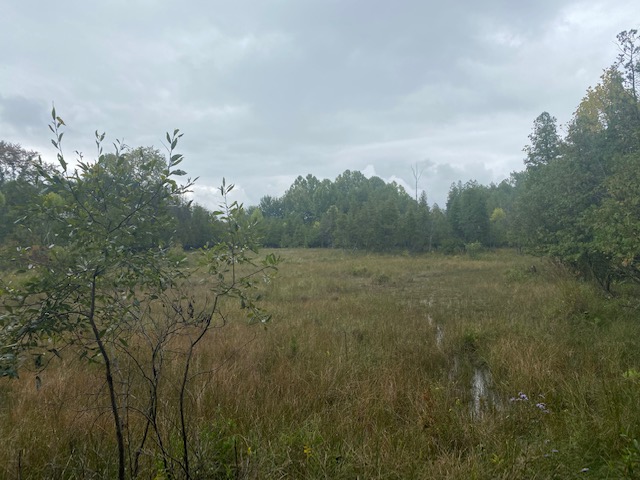 While I was at Cedar Bog I was asked to find two plants with pinnately compound leaves. The first one I want to show you is rather interesting and dangerous… 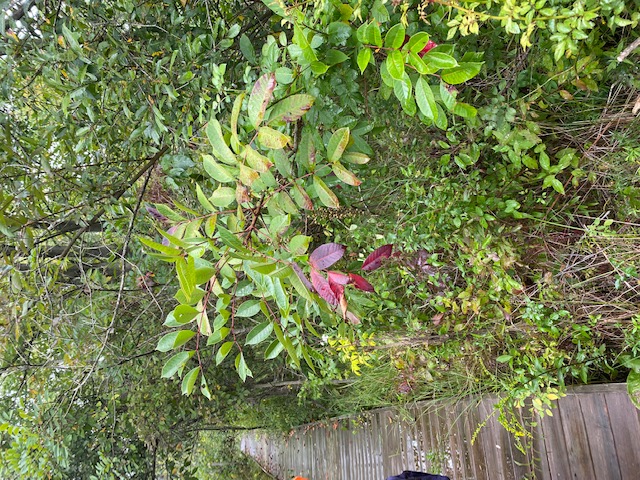 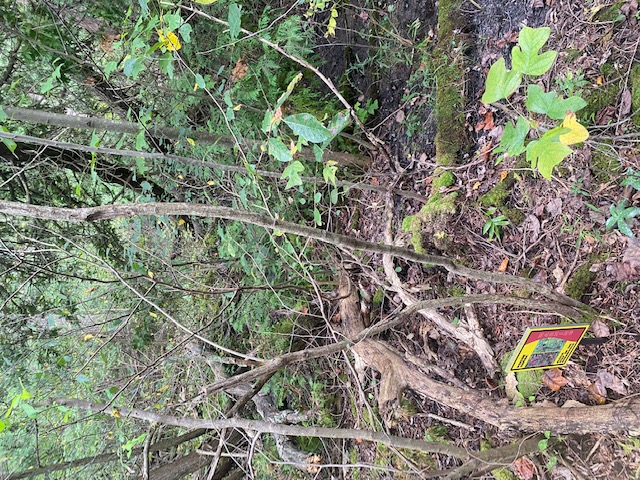 The Poison Sumac doesn’t look as scary as other poisonous plants like Poison Ivy, but it’s far more dangerous. Simply touching any part of this plant will cause severe irritation to your skin, and breathing in the smoke from burned logs can cause death2. At this point, you’re probably wondering how to identify it so you don’t accidentally stumble upon it. If you want to avoid it, look out for a small tree or shrub with gray thin bark. The leaves will be pinnately compound with reddish stems and entire leaflets. They produce white fruit that grows in clusters during the fall season2. If you’re not sure if it’s Poison Sumac or not, it’s best to avoid it.

The plant is native to eastern North America, but humans tend to avoid it rather than find good uses for it. The exception is that its sap has been used to make a black varnish2. Local wildlife has also found a use for this plant by eating its berries2. It seems to have no toxic effect on woodland creatures.

The Amur Honeysuckle is considered an invasive plant species in Ohio. It is characterized by its opposite pinnately compound leaves and wide growth. In spring this plant grows bilateral white flowers that eventually turn yellow1. In the fall it produces a bright red fruit that is eaten by the local wildlife.

This plant was originally brought to North America as an ornamental plant in the late 1800s where it was encouraged to be planted1. It was even used in erosion control due to its roots that take hold of an expansive area of the ground after being planted for a few years1. However, it was discovered that this plant did more harm than good for the ecosystem, and has since been banned from being planted. 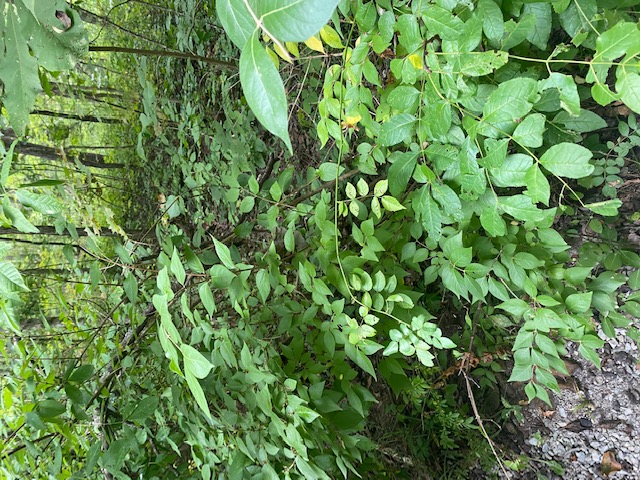 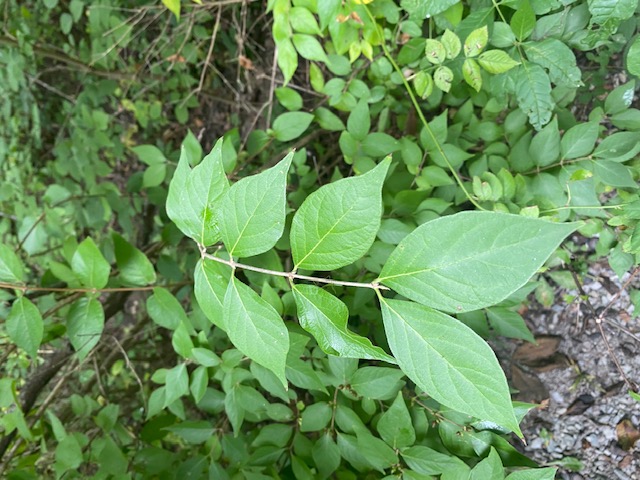 I do want to note that this tree was not found at Cedar Bog, but rather in the Cedar Ridge Picnic Area which was a stop on our trip. I did not know that the scavenger hunt was to be done at Cedar Bog, and after I met my quota of two plants with pinnately compound leaves I started taking pictures of more interesting wildflowers. 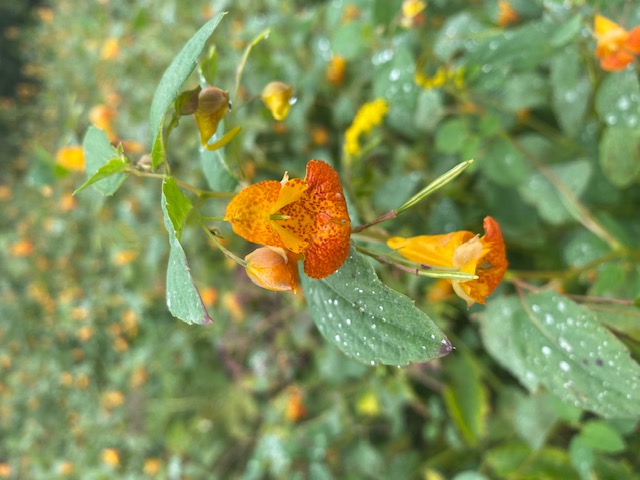 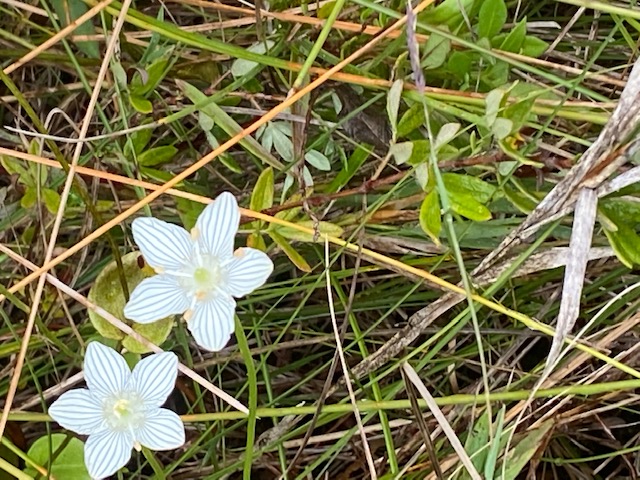 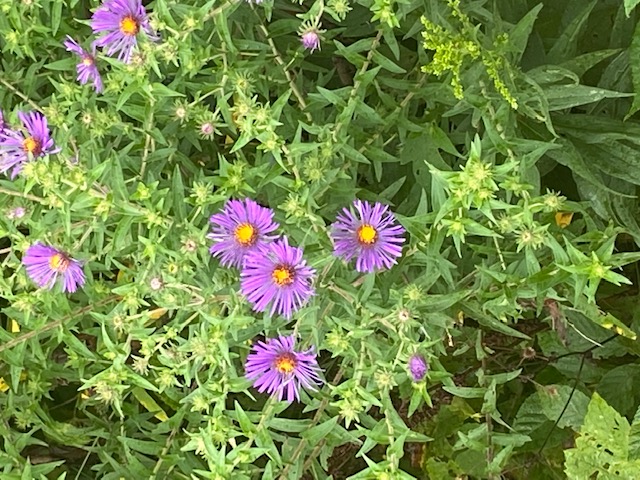 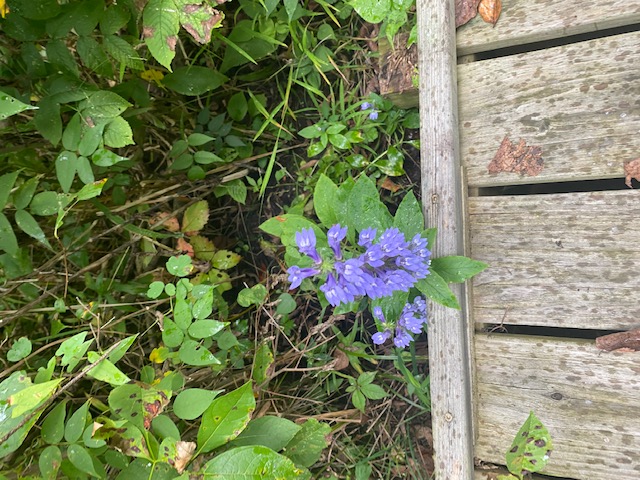 Thank you for looking at my discoveries at Cedar Bog in the limestone region of Ohio!